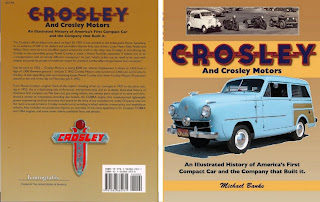 Just received a few author copies of Crosley and Crosley Motors; An Illustrated History of America's First Compact Car and the Company that Built It.  ISBN 1583882931, published by Iconographics.  200 photos/illustrations, and 40,000 words of history.

Since the 1980s, publishers of books with lots of color lithography have used first European and then Japanese and Chinese printers because they did good work and were cheap. American printers did good work, too, but their employees didn't work for five cents an hour.

Now, the tide is turning. Just as companies like Buck Knives are bringing manufacture back home due to increasing overseas labor costs and skyrocketing transportation expense, so are book publishers (whose products can be heavy) giving the work back to American printers. This is the case with Crosley and Crosley Motors, I am happy to say. 100 percent made in America!
--Mike

From Cover to Cover 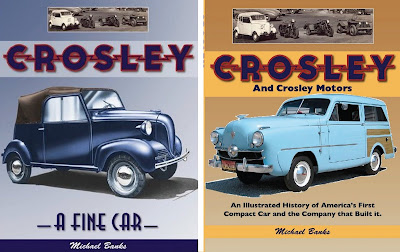 Author input on the covers of their books varies. Usually it's none to little. In some instances, the author supplies possible illustrations, as was the case with my Crosely automobile history, shown here. That applies mainly to non-fiction. Novelists may suggest a scene to be illustrated, but rarely do they have anything more to do with a cover. (An exception: when the author knows an artist who is not only good, but also has experience with book covers.)

The system works; professional designers usually are better at creating covers than writers.

I like both cover images equally well. Crosley: A Fine Car has a slight edge on the final title in my mind, but I don't mind the change. And the lengthy subtitle does give the reader useful information.
--Mike
To order a copy from Amazon, click here.
Posted by Michael A. Banks at 10:05 PM No comments:

What Would Happen If...? 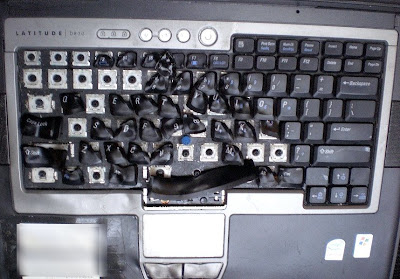 What would happen if you spilled a bottle of Sprite soda into your laptop's keyboard, and then put the laptop in front of a space heater to help it dry?

DELL: Built tough, for people who do stupid things! (Though the plastic used to make the keys could be heavier and more heat-tolerant.)
Posted by Michael A. Banks at 11:19 PM 4 comments: 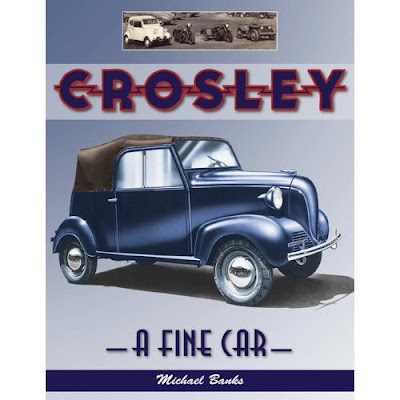 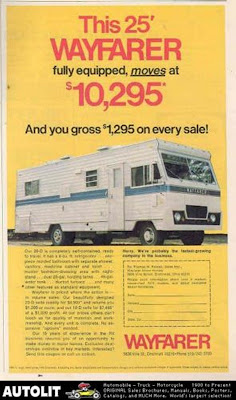 For several years in the 1970s, I seemed to be unable to leave the world of wheels. I worked in the GM plant (Fisher Body, actually) that built all of the Firebirds and Camaros in the country (save for the 5 percent or so that were required to meet California emissions--those were built in California). After a months-long strike and massive layoffs, I ended up as a summer replacement at two Ford Motor Company transmission plants. Both jobs (plus an extremely brief return engagement with Fisher Body) were very intense learning experiences about what went into cars, and about the people who built them. (Yes, I have a book manuscript. It's fascinating, if I do say so.)

Next came a very short stint in the auto parts business. And then I took a job with Wayfarer Motor Homes, the Ashley Ward Manufacturing Company of Cincinnati. Ward was just starting up the motor home business, with an 18-footer on Dodge or Ford truck chassis. Soon after came a 25-footer. The company had previously manufactured Nimrod and Wayfarer folding camper trailers.

From there I went to Semaphore Industries, a travel trailer manufacturing company with a unique product: a 23-foot camper that looked like a classic red railroad caboose. If you ever saw one, you remember it. About 800 were made, nearly all red; at least one was a railroad yellow in color. The company also made a number without the interior appointments. These were used as mobile demonstration/display units by the Baldwin Piano Company (for organs) and others.

As a part of my research for some new projects, I am looking for information, photos and brochures of Wayfarer and Nimrod products, and especially Semaphore Industries' Caboose travel trailers. Leads appreciated. Please contact me at mynewbook over at America Online (the good old aol period com). Thank you.

Oh--almost forgot! At GM and Ford I did assembly jobs. (Ford was the more difficult employer.) I was an electrician for the Wayfarer and Semaphore plants, assembling, installing and testing the 12-volt automotive and 110-volt appliance, air conditioning and generator systems.
Posted by Michael A. Banks at 2:34 PM 10 comments: 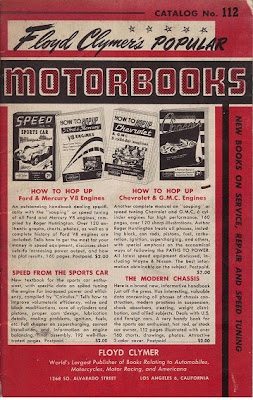 When I'm researching a subject it is easy for me to get distracted by interesting sub-topics. Some are so interesting that I can't resist following up on them, even if I don't use the information.

This happens a lot with automotive history. The history of the industry is an endless parade of fascinating people, companies and products. An example: Clymer auto repair manuals. If you have done your own car repairs, you probably know Clymer manuals. I believe they've outsold the Chilton and Haynes manuals for some time, and they left Glenn's and Motor magazine's manuals in the dust long ago. (I could be wrong with regards to Haynes; AutoZone moves a lot of Haynes manuals.)

More interesting than sales numbers is the fact that Clymer repair manuals grew out of a self-publishing operation. The original Clymer Publishing was started by former motorcycle racer and dealer Floyd Clymer in the late 1940s. (Clymer started out in business as an automobile dealer at the age of 11, in 1906--a story for another time.) His first book was Those Wonderful Old Automobiles, a nostalgic look back at the first few decades of automotive history. It sold so well that a big New York publisher picked it up. He followed that title with another nostalgia title.

When he wasn't putting together books like Those Wonderful Old Automobiles and Model T Historic Scrapbook, Clymer wrote and commissioned brand-specific repair guides like The 1955 Plymouth & Chrysler Auto Repair Handbook and The Volkswagen Owner's Handbook of Repair and Maintenance (1957). To non-mechanics, these books were every bit as valuable as the tools they used. Short of buying factory shop manuals (which may or may not have existed for a given model, and may or may not have been for sale to the public), there was no better way to get your hands on the vital information you needed.

Clymer's books were almost on the fan level, but they had solid content. In the case of his auto nostalgia books, they were so entertaining and sold so well that a big New York publisher picked them up (among the earliest examples of self-published books "proving" themselves--in a big way).

The repair manuals, as noted, offered information that hobbyist mechanics desperately needed. Not as much info as Motor's manuals, but the price was right. The balance was exactly what most customers wanted.

In trade paperback, Clymer's two-dollar manuals outsold the most popular repair guides of the day: Motor magazine's popular auto repair manuals, which cost three times as much. Motor's manuals were pricey hardcover productions--coffee table-sized volumes of 700 pages or more that originated in the 1930s. One got fewer pages and less info with Clymer manuals, but one saved enough to buy a set of brakes or a clutch.

I wonder if a similar startup line of enthusiast books could survive today. Clymer did most of his marketing by direct mail--via ads in appropriate magazines and catalog mailings to every customer he got. (He had tried an entirely different sort of direct-mail marketing in the 1920s, and ended up doing prison time. But that's another story.) Clymer titles didn't become bookstore books until after the mainstream publisher brought out his nostalgia titles.

What was the secret of Floyd Clymer's success? In the end, it was the content that sold the books, more than some trick advertising or marketing (something that today's would-be publishing millionaires might give attention). It helped that many were unique in their subject coverage. But Clymer did his share of promotion, sending out an endless flow of review copies at a time when books weren't lightly published and most of what came in to book reviewers would at least get a glance. He also sent copies to celebrities and elected officials across the country for endorsements and to create buzz. (I found an endorsement from Earl Warren in one Clymer title.)

All that was after the books were published. Before Floyd Clymer decided to publish a book, he looked for the market, and how to reach it. Some subjects were obvious. Was there are market for a "fix your Ford" book? Heck, yeah--there were millions of Ford owners. Chrysler? Certainly! As for reaching the market, the obvious way was to advertise in magazines read by men, who without a doubt did nearly all auto repair. Not only car magazines, but also publications like Popular Mechanics. The essence of his approach was to use the same marketing channels as the competition--while offering a low-cost alternative. It was the same approach that Crosley used to dominate the radio business in the 1920s. Fill a need for less.

Floyd Clymer ended up publishing hundreds of books, as well as motorcycle and car magazines. It is interesting to look back over the subjects he published. As owner of the company, Clymer was able to do things that publishers can't do today: take chances. Ford, Chevrolet and Chrysler--any publisher would go for subjects that had proven appeal to millions. But...Volkswagen, Nash Metropolitan, Simca? Clymer covered these and other relatively obscure makes. I think he had faith in every title he published, reasoning that while there were just a few thousand Simcas in the U.S., a well-produced book with no competition stood a good chance of grabbing the attention of most of those readers.

Whether he went for big markets or small, Clymer put together a lot of fascinating books Many of them (such as his annual coverage of the Indianapolis 500) are prized by collectors. The company spawned by Floyd's automotive history interest continues publishing repair manuals today. There is much, much more to the story (Clymer's inventions, in addition to his publishing and racing activities), but it will have to appear elsewhere.
Posted by Michael A. Banks at 6:20 PM No comments:

Is this blog useful or entertaining? Support it with a PayPal donation.

Michael A. Banks
(CONTACT: bookrevs@aol.com) A fulltime writer for the past 28 years, I've written several dozen books, among them On the Way to the Web; Blogging Heroes;, the New York Times bestseller Crosley; Before Oprah: Ruth Lyons, the Woman Who Created Talk TV; and a few science fiction novels. Forthcoming are a tell-all about Internet "interaction," a biography of Earl Muntz (who invented auto stereo), and computing titles. I've done quite a bit of editing, including acquisitions for Baen Books and serving as Associate Editor or New Destinies.